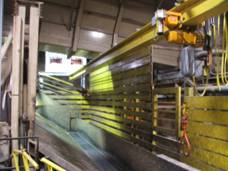 The recourse for problem one was to manually un-jam the logs with a pick, a very strenuous and dangerous process. Problems two and three utilized a single monorail crane over the chipper  In both cases, the single hoist was severely side loaded as it was not positioned properly over either operation and was often pinned to prevent movement along the monorail. 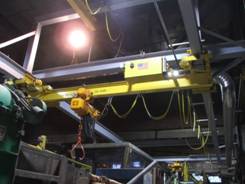 The first solution utilized a radio controlled 1 ton monorail with a Harrington hoist and motorized trolley running the length of the conveyor in front of the de-barking units. This allowed the operator to run the hoist from the control room and, with the use of picking hooks, lift the logs to remove any blockage.

The second solution was a 2 ton bridge crane with a Harrington hoist and motorized trolley, located over the conveyor allowing the oversize logs to be lifted and moved along the runway to the aisle and lowered for removal.

A third solution was a 3 ton crane with a 3 ton chain hoist on a new monorail positioned directly over the chipper in-feed, which allows the operator to remove logs that become jammed as they are entering the chipper.

All three cranes and their support structure were designed, built and installed by OMH. The project entailed field measurement of the existing structural steel and building foundation, calculating loads on the existing and new steel framework, removal of the unusable existing structural and field fitting the entire system during a one week window in a plant wide shutdown. 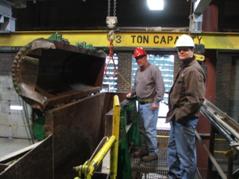 All completed on time, and within budget, to keep the disruption to the plant to a minimum. The previous safety concerns to the operators were eliminated and day-to-day system shut downs were reduced dramatically.